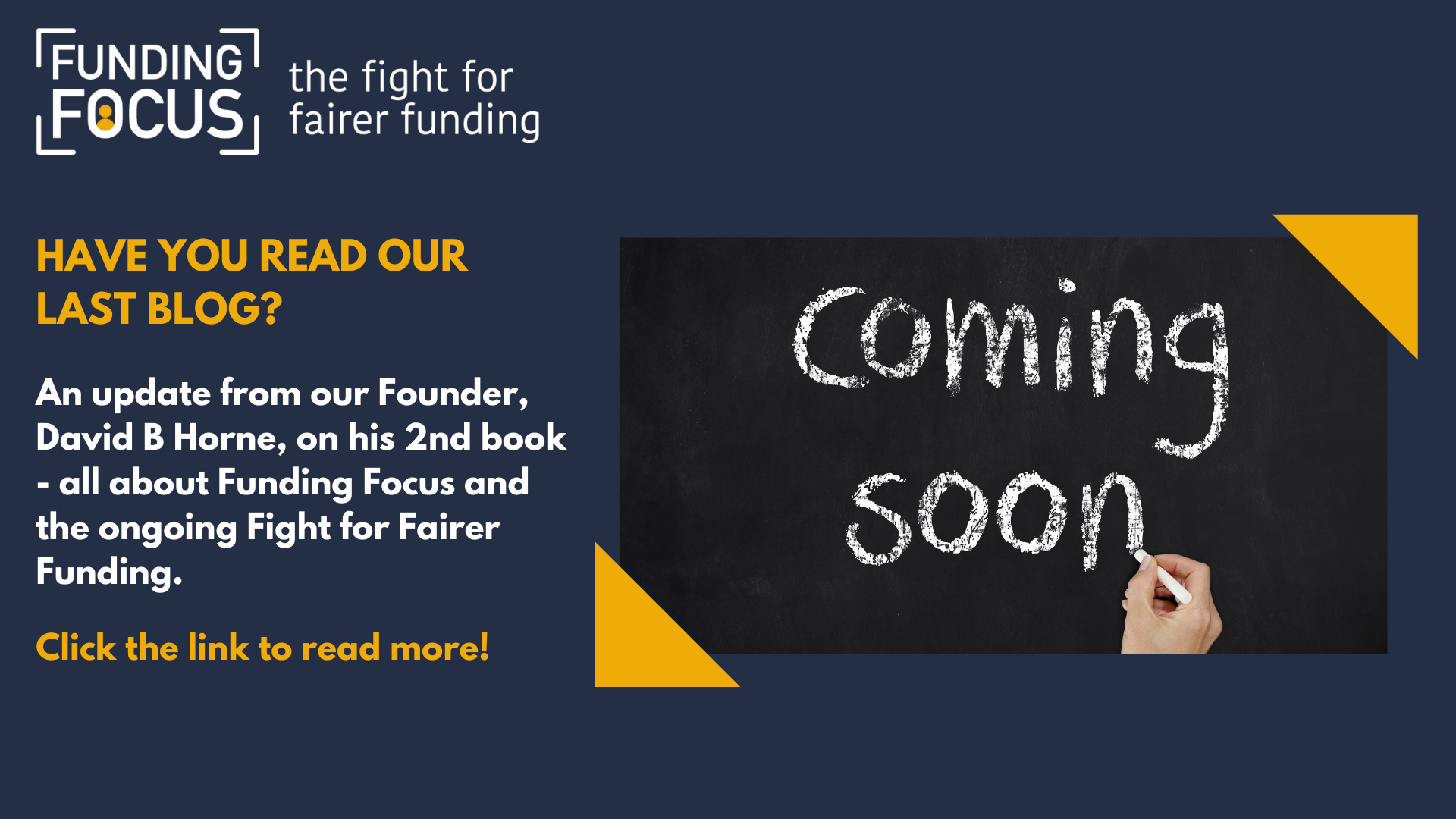 Nearly a year ago, at our 2nd Annual Funding Focus Conference, our Founder, David B Horne announced that he was going to write his second book and that it would be all about the work he is doing with Funding Focus to level the very uneven playing field when it comes to raising capital. We are delighted to say that the book is getting close to finished, and David has told my publishers they will have the final manuscript by the end of January! The book will be published in Spring 2022. There we are: nothing like a public commitment to cement it in your mind.

Here’s a further update from David himself.

What a journey it’s been

When people ask how long it took to write my first book, Add then Multiply – How small businesses can think like big businesses and achieve exponential growth, I tell them it was 30 years in the making and 6 months in the writing and editing. This one has been rather different.

My Funding Focus journey began in the spring of 2019, when I was speaking at an event about raising capital for SME businesses. After my talk, a woman came up and asked me why so little funding went to female entrepreneurs. At the time, I had no idea this was even an issue. Blissfully unaware of a glaring injustice in the system. You can read more about the story on the Funding Focus website or check out my TEDx talk, “The Fight for Fairer Funding”. For now, let’s get back to the book.

It’s been a very different process this time round. In January I started out with what I thought was a clear structure and goal, and I got on with the writing. By late March I was over 20k words and things seemed to be going swimmingly. I then had a call with the person I have asked to write the foreword to the book, and she blew my world apart. It turned out that much of what I had written could have come across as mansplaining. She challenged me to think MUCH BIGGER, referring to the quote from futurist Alan Kay: “The best way to predict the future is to invent it.” My mind just kind of exploded at that point. I went back to the manuscript, read it again and thought: “No. This is all wrong. The way I’ve written it could be interpreted completely the wrong way and could destroy everything I’ve worked so hard to achieve.” That was a near-disaster averted! Thank you, C.

Back to the drawing board

I repurposed the content I had written, chucked out about half of it as it was all wrong, and started writing again. This summer my wife and I took an extended break in Canada to visit our family and friends whom we hadn’t been able to see the year before due to the pandemic. It was wonderful, having time with some of the people we love most in the world. While we were away, I finished the re-write of what now forms Part I “What It’s Really Like Out There” and Part II “Raising Funding for Your Business” of the book. And then I got stuck. To put it more accurately, I got scared. Part III of the book is called “Making Fundraising Fair” and that part was really daunting. Everything from my first book and everything from Parts I and II of this book are what I know, what I have done and my take on how the world of fundraising works. Part III is about predicting the future, or as Alan Kay puts it, inventing the future. Whoa!

What if I get it wrong? Should I under- or over-estimate what I think we can achieve? Is it really down to me to be responsible for this? I’m not a futurist, what am I trying to do? These questions and more started racing around my head and I ended up with the worst case of writer’s block. Nothing came out for weeks. Nothing. I had to stop the shitstorm that was running between my ears.

Fortunately, I had a brainwave and reached out to my publisher, L, and asked for help. (Side note: asking for help when you’re stuck on something is usually a pretty clever thing to do, but for some reason many of us don’t do it. We did it when we were kids but it seems that as adults we’ve been conditioned not to ask for help. We should do it more.) She asked me to send her the manuscript as it currently stands and said she would read it and come back to me, which she did. She said that Parts I and II were excellent and gave me an incredibly useful suggestion on how to crack Part III, which I’m working through now. The storm in my head has subsided and there is a clear plan of action to get the book finished this year, then get it out to my team of beta readers for their feedback on the whole thing, and I’ve promised my publisher she will have the manuscript ready for the formal edit and typesetting by the end of January.

I’m grateful to both C and L for their valuable and constructive input to my writing process. It will have made the final product so much better than what I had initially written. And I’m looking forward to the feedback from my beta readers too. If it’s anything like the first book, there will be a quantum improvement thanks to their input.

So next spring, watch out for the release of Funded Female Founders – Unlocking $4 trillion of economic value currently being left on the table.

With love and gratitude,

« An Autumn Analysis
Inspirational Reading: Our Top 5 Blogs to Follow »